Technology has transformed learning in many areas, particularly through app-based solutions. Lucy Ingham speaks to Alon Schacham, CEO and founder of Compoze, about how it is taking on music

Technology is changing the way we learn across many areas, with incremental, app-based learning becoming an increasingly popular approach. In language, Duolingo has become a leading name around the world, while in programming, Mimo is gaining considerable ground.

Now, however, ScoreSkills is taking up the challenge in an area hitherto undisrupted by education technology: music.

The second and now flagship product from Israeli startup Compoze, ScoreSkills is designed to tackle the twin issues of poor access and poor theory that surround music education.

“We’re trying to solve the problem of learning music properly, because a lot of people either don't get to study music at all or get to study music with teachers that fixate on the wrong aspects of it,” Alon Schacham, CEO and founder of Compoze, tells Verdict.

ScoreSkills is by no means the only app targeting music, however Schacham insists that it is different in that it focuses on building core music knowledge, rather than simply teaching set songs.

“There are a lot of apps out there that are a Guitar Hero equivalent: put your finger here and press it for that long and so forth,” he explains.

“So that's kind of the way a lot of teachers tend to handle music education, which is the easy way to go. The problem is it leaves the student very ill willed, and most people after two or three years would just give up.”

He compares this approach to learning a language by learning different songs written in that language.

“You will learn the song over and over; you get another song and another song. After six months, you know, like five songs in Japanese, you know them perfectly well. But you won't have any idea about Japanese at all. You won't know the language.”

He argues that “music is a language” and so should be approached using the same underlying principles, which is where ScoreSkills comes in. 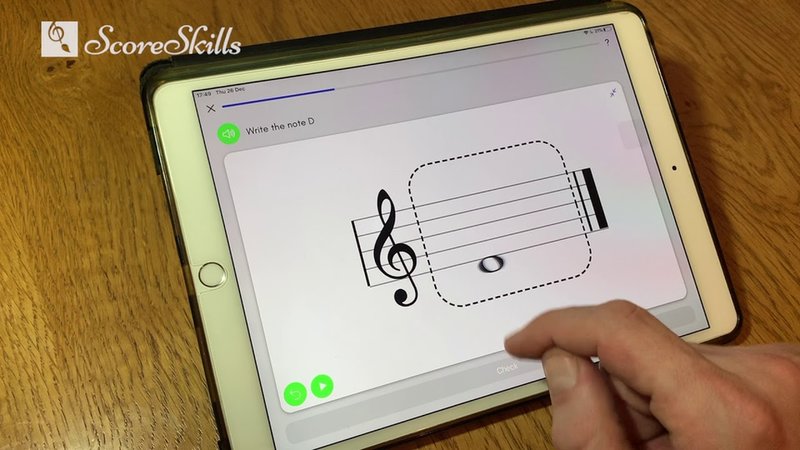 Central to ScoreSkills’ approach is a focus on developing sight reading and ear training, rather than a specific instrument.

Users are presented with simple, bite-sized tasks completed on a music stave – better known as a staff in the US. These are designed to gradually build up music knowledge, with tasks including hearing a specific note then selecting it, arranging a melody from parts or pairing notes with their corresponding positions.

This is presented as a game, in much the same way as Duolingo teaches users language.

“The comparison to Duolingo comes from the fact that we are teaching without explaining things in a frontal way, just through bite-size exercises that allow you to make mistakes, which are very, very tiny, and after a couple of mistakes you don't need to make anymore,” explains Schacham.

“The comparison to Duolingo comes from the fact that we are teaching without explaining things in a frontal way, just through bite-size exercises that allow you to make mistakes.”

This approach enables ScoreSkills to “instantaneously start validating” a user’s understanding of music, with Schacham giving the example of Israeli children who have never seen sheet music before very quickly picking up basic principles.

“Because we're from Israel, we've seen kids thinking that notation comes from right to left,” he explains. “And only after making the first mistake, they go: ‘okay, notations left to right’, and they get it by themselves. You don't need to explain it, which is really, really cool.”

An additional benefit is that the app allows users to learn without the need for an instrument – significantly increasing access to a skill that can often come with a high financial barrier.

Currently available on iOS, ScoreSkills was only launched in February, but has drawn funding from Israel’s education ministry due to the potential of the app.

A cross platform version, says Schacham, is “very close”, at which point it will be used within the Israeli educational system as “iOS devices do not work well with school systems”.

In the long run, he hopes to remove the negativity that can so often come with learning music.

“If you remove that human negativity and it's a game and you can fix it, then everything becomes much easier to learn,” he says.

“So that's where ScoreSkills comes in. And hopefully that will create this bloom, this community that we're hoping to see in just a few months.”