Neurosity: The Startup Bringing Mind-Controlled Computing to the Masses

It may sound like something out of a sci-fi film, but with brain-machine interfaces emerging as a significant nascent market, it is only a matter of time before mind-controlled computing becomes mainstream. Ellen Daniel speaks to the founders of Neurosity to find out how the company’s premier product Notion is paving the way

Mind-controlled computing is a common sci-fi trope, with visions of a future where devices are controlled without the need for buttons, keyboards or mice appearing to be far from a reality.

However, such devices do in fact exist and, although at the early stages of development, are already having a significant impact on the mobility and everyday lives of some individuals.

Last year, news that Elon Musk's neurotechnology startup Neuralink made waves after it announced it was developing implantable brain–machine interfaces. Neuralink plans to begin its first human tests in 2020.

Even Facebook is reportedly investigating the possibility of integrating hands-free communication into its platform.

But is the mainstream market ready for the arrival of brain-controlled computing? 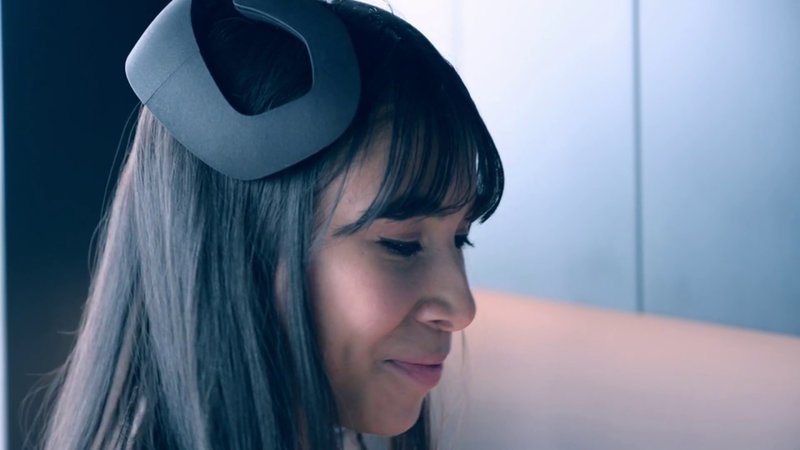 Such technology is possible thanks to a brain-computer interface. This works by using sensors to read EEG signals, electrical activity generated by the brain, and translate this into specific commands for a device.

For example, over the past few years researchers at the University of Chicago have developed a robotic prosthetic arm that can be controlled using electrodes implanted in areas of the brain, which receive signals when the user thinks about moving their arm.

One organisation exploring the idea of "empowering the mind" through computer-brain interfaces is Neurosity. Founded by ex-Boeing employee AJ Keller and former Netflix software engineer Alex Castillo, New York-based startup Neurosity is on a mission to create "the best brain-computer interfaces and neuro-powered applications".

The startup unveiled Notion, which it describes as "the first thought-powered wearable computer", in 2019, and the duo believe it could be key to tapping into what's going on inside the brain, without the need for an invasive device.

The chipset within Notion is able to capture electrical activity produced by neurons in the motor cortex of the brain 250 times per second. When the wearer imagines carrying out a particular action, such as scrolling on a screen, the electrical signals produced from this are received by eight sensors and interpreted, meaning they can scroll simply by thinking about it.

“Notion images the brain 250 times per second. And it has on-board machine learning that we built in-house where its only purpose is to decode thoughts.”

"Notion as a first step towards getting people to have more information about what's going on inside their mind,” explains Castillo.

“We combined state-of-the-art brain imaging with internet and computing modules. And the reason why we did this is because we live in a world where we can write, and we can use everyday applications that understand a little bit more of what you want, the way you want to feel.

“So Notion images the brain 250 times per second. And it has on-board machine learning that we built in-house where its only purpose is to decode thoughts.”

“I think what's really important is to think about context as the driving factor for interaction when it comes to human computer interaction,” adds Keller.

“That's all we're doing. We're looking at what current context you're in and then mapping the same gesture to then fire a command.”

Unlike technology used by the likes of Neuralink, which requires users to undergo surgery to have a chip implanted within the skull, Notion functions as a headset, similar to one worn for VR, with the processing occurring within the headset itself, which is as powerful as a Macbook Air, according to Medagadet.

“Essentially, [with Notion] you're able to take it off at the end of the day. That's the big thing I would say: we don't have to drill into your skull,” says Keller.

“You're able to take it off at the end of the day: we don't have to drill into your skull.”

“But we're not able to get fine grain neuron spiking, which is what Elon Musk's company is getting. So they're measuring individual neurons firing, whereas we're measuring thousands of neurons firing, that's a little bit different of an approach. Right now, as we continue to improve signal quality and sensor resolution and bring in new sensing modalities, we'll be able to get closer and closer to measuring individual neurons spiking.”

The startup has already shipped its first batch of units, with Notion devices now available to pre-order for $799.

Neurosity joins a number of organisations that have developed non-invasive brain-computer interfaces, such as NextMind, a French startup that garnered attention at CES 2020 for its devices that allow users to play games and control electronic devices using brain signals.

Although the ability to operate a smartphone hands-free may be a matter of convenience for many, the core goal of Neurosity is centred around those for whom this could have a life-changing impact.

Researchers at the Federal Institute of Technology in Lausanne have developed a robotic wheelchair that moves using a combination artificial intelligence with brain signals measured by a skullcap worn by the user.

“When you think about the benefits, this can transform people's lives,” Castillo says.

“We can potentially save people's lives as well when we get into the medical side of things and health diagnosis. Ultimately we take a positive approach, and we're doing this because we do have a loved one that could benefit from this. We do have family with depression, we do have family with epilepsy and not doing something about it feels irresponsible.”

Keller explains that one key use case that Neurosity is exploring is assisting those with limited mobility.

“When you think about the benefits, this can transform people's lives.”

“So it uses the onboard machine learning sort of like how you train your thumb on your phone's fingerprint sensor. You do it a couple times. And the system learns what that electrical activity in our case looks like.”

Notion requires users to train the device to recognise the electrical activity within their brain, similar to training a smartphone to recognise a fingerprint.

“Right now, it requires about four minutes of training for those imagined body movements,” says Keller. “And this is something that we're always working on. It used to take a lot longer than that, and we're always looking to lower that amount of time.

“I assume next year, it's going to be about a minute, because we will have so much previous data that we'll be able to sort of modify the training to you instead of having to create a new one for yourself.”

"You don't have to be an expert"

A key aspect of Neurosity's business model is opening up its platform for developers to build upon and encouraging people to develop apps that can be navigated using Notion. Notion can connect to any web application that uses Neurosity's API.

“A lot of the feedback is that the ability for people to build on top of it is much easier than any other platform out there,” says Keller.

“This is important as you don't have to be a neuroscientist to build an application. You can just be a great web developer, come to buy a Notion and create your own experience that helps someone you love in your family and eventually build a business on top of that.

“You don't have to be an expert. You just come in, use JavaScript, which is the most accessible programming language in the world. And you're able to start putting your expertise on top of it. Instead of having to make your expertise deciphering brain activity.”

“Because we put the computer on the actual headset, all of your secret data is all computed locally on the actual device and never has to leave.”

When it comes to data, nothing can be more personal than brain activity itself, making the idea of hacking a brain computer interface extremely unsettling. According to ZDNet, researchers recently discovered that brain-computer interfaces could be hacked using canonical correlation analysis.

Keller explains the steps Neurosity has taken to ensure the device is secure:

“Because we put the computer on the actual headset, all of your secret data is all computed locally on the actual device and never has to leave. So traditionally, they used to have to send this raw data to another device for processing, or to the cloud for processing to make sense of it.

“But with our device, since it's the first one to combine the computers, internet, and brain imaging, it's just like how your phone stores your fingerprint data locally in the phone, it doesn't need to send that over to the server. It keeps it all local and safe.

“I don't want to say no, and then someone goes and spends the next two years trying to hack us.”

"Our job is to try to advance humanity"

Looking to the future, Neurosity is currently focused on improving the accuracy level of Notion, which currently stands at around 65% to 85%. From there it will undertake pilots with the aim of bringing the product to those who could benefit from it.

The company is currently looking at how the device could be used to improve individuals' concentration and productivity.

“The biggest one that we're looking at right now is improving people's productivity through helping them with focus,” explains Keller.

“I think if you look at a school in five years, you'll see a bunch of people using this type of information to improve their learning. So they know when to take a break, they know when the ideal times are, their peak hours are when they're most productive. I think it'll become very, very prevalent.”

Dependant on FDA approval, from there Neurosity is looking to expand its medical applications, particularly for neurological conditions.

“Epilepsy is a great one where there's been evidence to show that a unique brainwave is generated like an hour before an epileptic seizure. So you can get to a safe place and make sure that you're okay. And maybe you can take preventative steps,” Keller adds.

“The biggest application that we're looking at right now is improving people's productivity through helping them with focus.”

“For people playing contact sports, there's huge awareness when it comes to rugby or soccer or football, head to head contact where you're bumping your head causes concussions and not being able to diagnose that immediately is a huge issue. So what we see happening is that you'll have a device, you'll have a login, you'll do your regular scans, take two minutes to take a quick snapshot of your brain activity.

“[It could also be used in] treating depression as depression doesn't happen overnight. It's something that happens over time. And so if you're able to be aware of that, and bring that subconscious activity to the conscious mind, there's a big opportunity that you can share that data with your doctor, you can become self-aware and improve it yourself and see an effect on your neural activity.”

And for critics who believe that this type of technology is overreaching, Castillo believes that this is dependent on how it is applied.

“People that say that the technology is a step too far, are probably the same type of people that said that before cell phones became a thing,” he says.

“I think ultimately what we have to worry about is humans and how they decide to do it. So technology can be misused, and that would be up to the person. Our job is to try to advance humanity, empower people's minds to be healthier, happier and better, and make it as difficult as possible for someone to be able to misuse it.”

Images and video courtesy of Neurosity